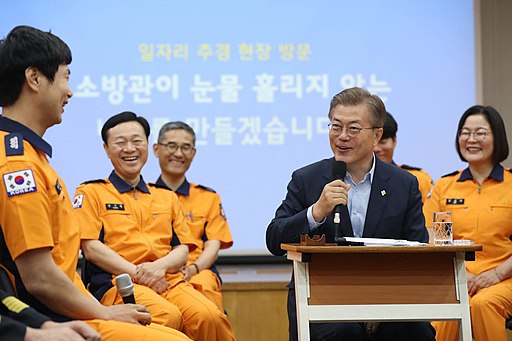 Firefighters can’t fall asleep 365 days to protect their lives and safety. Firefighters are the people who run towards everyone when they evacuate. Thank you for your dedication and hard work.

There are also people who are not firefighters, serving neighbors and fighting fires. Thank you to 100,000 medical firefighters who care for the safety of the local people with honor and reward.

Family members are behind firefighters who run day and night to disaster. I will always boil my heart. I would like to extend my deepest respect and comfort to my family who are the source of fire courage and pride.

Dear respected people, fire fighters, especially this year is the first firefighting day to be independent of the Fire Department. Your feelings and joy will remain. He would have come to this place with greater responsibility. I stood here with the same heart.

The history of firefighting that began on this land began with the nation’s commitment to take responsibility for the safety of the people. The first fireman’s office in Korea, Geumhwa Illustrated, was installed by King Sejong who cared for the people. The volunteer fire brigade has a history of over 100 years. Firefighting has always kept people safe at the forefront.

As disaster forms become more complex and larger, the role of firefighting becomes even more important.

The Fire Department, now promoted to an independent agency, must perform a heavy duty to oversee land disasters. Not only fire but also natural disasters and social disasters occurring on land, we have to keep our people safer. The people now send their expectations and trust to the independent fire department. I urge you to bring greater pride and commitment to firefighters.

Firefighters, medical firefighters, I visited the Fire Fighting Tower today. I paid homage to the civilian firefighters on the tower. There was a time when I confronted a fireman without a fire suit and faced a large fire without a ladder truck. There was an unlimited responsibility of senior fire fighters until fire became a strong neighbor of the people.

It was also a time to look back at how much the nation did as much while the firefighters sacrificed for the people.

In the meantime, I have met firefighters with a sense of mission at the front line fire station, the fire school and the fire site. Everyone was proud, but they were having a hard time.

Last October, I remember the tears of the late firefighter Kang Ki-bong and her colleagues who met at the office. It was because of the lack of manpower that the fire fighter who left the department of nursing and was in charge of the emergency service was put into rescue work.

Firefighters’ chronic shortage of work is not only overburdening, but also threatening national safety and their own. There are currently 19,000 workers in the field who are in charge of firefighting, first-aid and rescue, less than the standards set by law.

The government plans to expand the shortage of firefighters by 2022, starting with 1,500 people this year. I tell the people that both the people and the firefighters must do it for a safe country.

Dear respected people, despite the lack of human resources, the role that our firefighters have played in the past has been remarkable. Last year firefighters put down an average of 120 fires a day. Every day 2000 rescues were carried out and 368 people were rescued from fires and accidents.

Behind this brilliant performance was the heartbreaking sacrifice of firefighters. In addition to the casualty accidents that the public finds in the media, one person dies every day at fire and rescue sites.

It is not just a visible injury. Seven out of ten people were diagnosed with health problems due to dangerous work, disastrous accidents, and irregular shifts. There are more suicides due to mental trauma than single workers.

We should no longer demand only a sense of mission and sacrifice. The state will move forward to improve the treatment of firefighters. Strengthen the state’s responsibility for firefighters’ health and civil disasters. We will promote the establishment of a complex healing center that can prevent and cure physical and mental damage of firefighters.

We will consider new establishment of firefighting hospital. A life-saving firefighter is definitely a sublime profession. At the same time, it should be a good job.

We are discussing with the branch offices the transition to the post of the firefighters. I believe it is necessary to bridge the gaps in the treatment of firefighters and personnel and equipment in different regions and to improve the fire safety services in various parts of the country.

Dear firefighters, firefighters are the nation’s hands that hold the hands of people at the crossroads of life and death. As long as the people trust in firefighting, there is a deficiency that must be revealed and improved. We would like to say a few words to the fire department.

First, we must strengthen our ability to prepare for and respond to increasingly complex and growing disasters. We hope to cultivate the capacity to respond to special fires such as natural disasters caused by climate change, nuclear power plants, industrial complexes, and fires caused by chemicals.

The earthquake that occurred in Gyeongju in September 2016 confirmed that Korea is not safe from earthquakes. The Fire Department is willing to focus its efforts on establishing a systematic response capacity for large disasters early.

Second, we must ensure that we are not alienated from safety due to the place of residence, age, or disability. Special attention should be paid to fire-fighting facilities in areas that are vulnerable to safety, such as dense housing areas and traditional markets, and to eliminate safety blind spots such as farming and fishing villages where no ambulance is deployed.

Safety measures for pregnant women, children and the disabled, especially those who are particularly vulnerable, must be prepared more systematically and meticulously. The plan to expand the 119 Anxiety Call Service, which is currently available only to a few enrolled troops, to senior citizens aged 65 or older who are sick.

Dear respected people, firefighters, the people believe that calling 119 can save them. In the meantime, all of you firefighters have returned to your faith with all your might. Thank you and proud.

I hope today’s fifty-fifth ‘Day of Fire’ will increase your pride and pledge to keep your people’s lives and safety even more secure. I will always work with you to make Korea safe. I wish you and your family a happy life. Thank you.

Moon Jae-in, President of the Republic of Korea